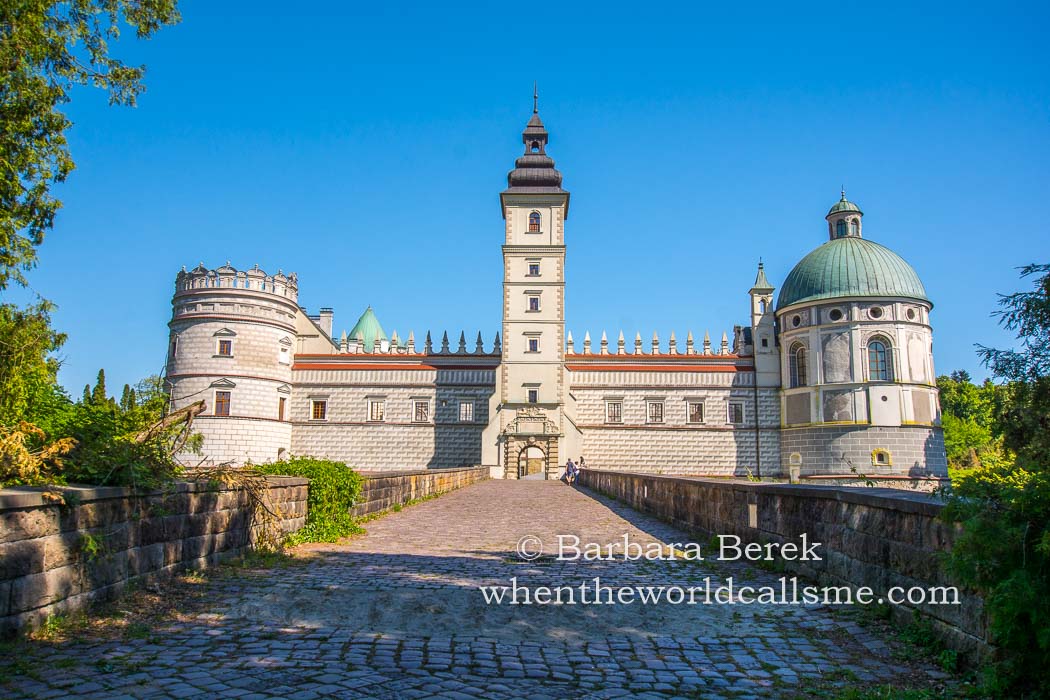 The history of the castle begins with Jakub from Siecień, who in 1525 became the owner of Śliwnica village. He began to transform the already existing defensive court into a castle and surrounded it by a shaft and a moat. The descendants of Jakub took the surname Krasicki from the name of the nearby village of Krasice.

The city of Krasiczyn was founded by the castellan of Przemyśl Stanisław Krasicki in the years 1615-1620. In 1592 he started the alteration of the castle, which was later continued by his son Marcin Krasicki. As one of the most prominent patrons of art in Poland at the time he transformed a fortified seat into a magnificent aristocratic defensive residence with four characteristic corner towers: Divine, Papal, Royal and Noblemen’s (Knight’s).

The grand arcaded courtyard of the castle is surrounded by two residential wings and two curtain walls from the south and west. The walls of the castle are decorated with baroque sgraffita. In the west wing there is a gate with a high clock tower, and behind it a stone bridge, once leading from the castle to the city.

After the heirless death of Krasicki family, the castle changed its owners many times. In 1835 it was bought by Prince Leon Sapieha, who after the defeat of the uprising and confiscating his goods located in the Russian partition, made Krasiczyn his ancestral seat. He was not only an outstanding politician, but also a host who started here, among others, construction of weaving workshops.

On the eve of the marriage of his son, Prince Adam Sapieha, the castle burnt down. Only the Chapel located in the Divine Tower survived. The interiors were rebuilt with time, unfortunately, nothing survived to the present day. Everything was destroyed and burnt by Russian soldiers during the Second World War.
Currently, the most valuable element of the castle is the renovated Chapel dedicated to the Assumption of the Blessed Virgin Mary.