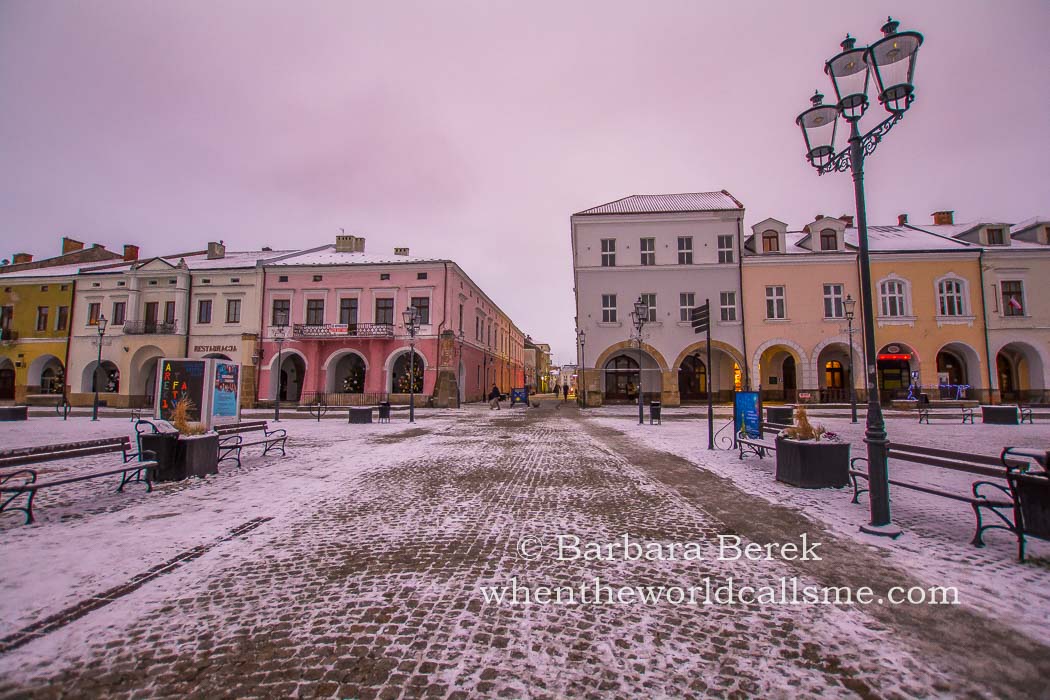 Krosno, located in the south of Poland, in the Jasło-Krosno Basin, which is part of the Central Beskidian Piedmont, is undoubtedly a city with many faces. Certainly it is associated with the glass industry, the oil industry and even aviation. It was in Bóbrka near Krosno in 1854 that Ignacy Łukasiewicz founded the world’s first oil mine. But let’s go back even earlier 🙂 .

The first traces of settlement in the Krosno region date from the Neolithic period (4200-1700 BC). Archaeological excavations show that the Celts probably also lived in these areas. In the Roman period there were large waves of human migration. At that time, merchants from southern Europe, mostly from the Roman Empire, appeared in this area, as evidenced by Roman coins found during excavations carried out, among others in the Market Square in Krosno.

During the centuries various settlements were created in this area, but the hill in the forks of Wisłok and Lubatówka, where today there is the old town of Krosno, as a convenient place for defensive settlement, has been inhabited continuously since the 10th century.

The Market Square obtained its current shape during the location of the city under Magdeburg law, after 1342, by the will of King Casimir the Great, although its origins date back to pre-settlement times. At the beginning of the 16th century, a Renaissance town hall was erected in the Market Square, which unfortunately was demolished in 1818. During archaeological works in the Market Square, next to the remains of the town hall and another older municipal building, the so-called “Wójtowski’s House” from the mid-fourteenth century, there was also another discovery, the fifteenth-century water supply system, which at that time only Kraków and Lviv could boast.

Krosno’s Market Square, although smaller, was associated with that of Krakow. Hence Krosno gained the nickname “parva Cracovia” – meaning “little Krakow“. And it was not an exaggerated term. The view of Krosno appears in various works from the 16th and 17th centuries in the company of, among others Krakow, Warsaw, Poznań or Zamość, and the example may be “Civitates orbis terrarum” (Cities of the world), published in 1617 in Cologne.

What captivates in Krosno is above all a well-preserved old town, which can still boast of historic churches and tenement houses. The oldest of them, “Wójtowski’s House“, built in the 15th century, is located in the Market Square. It is worth emphasizing that it is also the oldest burgher tenement house in the entire Podkarpackie province. Formerly tenements in the Market Square were equipped with magnificent Renaissance arcades (giving the city an Italian character). However, they survived only in the southern and northern frontages.

It is also worth paying attention to the churches preserved in Krosno. Gothic Franciscan church was founded at the beginning of the 15th century. It is built of brick, using fragments of an older building (13th-14th century), and is the oldest (still active) church in the province. The granting of land to Krosno Franciscans who came here in 1238 was officially approved in 1397 by Queen Jadwiga.

The parish church, the minor basilica of the Holy Trinity was founded by King Casimir the Great during the location of the city, and its consecration took place in 1402. However, it was significantly expanded in the 15th century due to the growing needs of the developing city.

The interior of the church is decorated with many works of art, including Baroque paintings, full of Sarmatian splendor, showing attachment to life and the inevitability of death. In the Mannerist main altar you can see the work of the court painter of Polish kings from the Vasa dynasty, Venetian Tomasso Dolabelli, brought to Krosno by Robert Portius, a merchant living in the 17th century and the richest townsman in Krosno. Thanks to his generosity, we can still admire many beautiful and valuable monuments.

The whole of the old town was enclosed within double defensive walls with two city gates, Krakow Gate from the north and Hungarian from the south. A wine route to Hungary ran through the city, and Hungarian wine was one of the most important commercial goods. Various laws granted to the city by successive kings contributed to its rapid development.

In a document issued in 1365 King Casimir the Great ordered merchants going to Hungary and Russia, and returning from there, not to dare to bypass Krosno. However, in 1367 he gave the city the title of the Royal Free City of Krosno and its own coat of arms. Another laws, showing how important the trade of goods from Hungary was, granted on 12 May 1559 by Zygmunt August, were the right to store goods from Hungary, the granting of income from liquor tax for the construction of city walls and the exemption of burghers from the payment of commercial duties.

Krosno itself with its captivating history is undoubtedly worth visiting, but there is also something for lovers of castles and ghost stories, specifically the nearby castle “Kamieniec” in Odrzykon. I managed to meet this Christmas face of Krosno 🙂. Despite the piercing cold, definitely successful sightseeing 🙂.