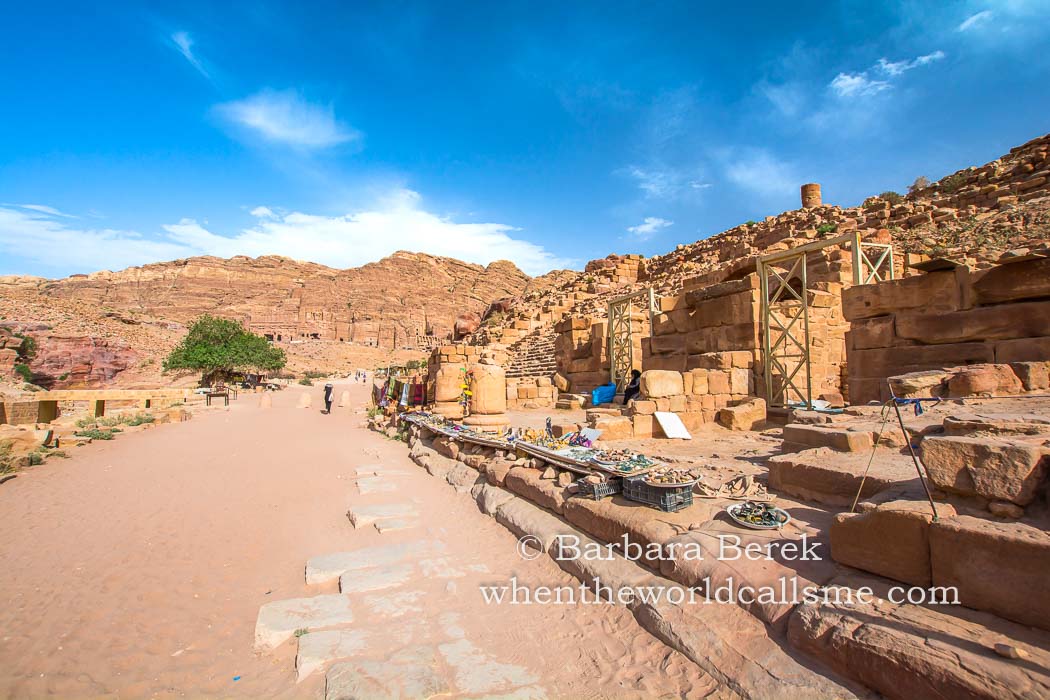 The ruins of ancient Petra are so vast that visiting it is quite demanding 🙂 Still worth the effort, after all it is one of the new 7 wonders of the world. 😀

Hike through the gorge known as the Siq

The discovered ruins of ancient Petra stretch along the main road of the city. The ancient Nabataean road, running along Wadi Musa and forming the main axis of the city, was resurfaced and paved in Hellenistic and Roman times. During the heyday of the city, the main public and religious buildings were built along this road on the section between the Royal Tombs and Qasr al-Bint Temple.

Facing the north side of the street are the Nymphaeum (100-200 AD) and the Temple of the Winged Lions (about 25-75 AD), probably dedicated to the Nabataean goddess Al’Uzza. A special feature of the temple is the complex of adjacent workshops, which probably helped to finance religious rituals taking place in the temple.

A short distance from the Temple of the Winged Lions are Byzantine churches, in one of which a beautiful mosaic floor has been preserved. In 1993, approximately 140 papyrus scrolls were found in a church area. They had been carbonized in a fire that consumed part of the church, but still after years of research it was possible to read them. They are written in Byzantine Greek, and are dated to 537-594 (Emperor Justinian introduced the order to place the date at the beginning and end of the document) and contain land ownership deeds and judgments in disputes.

The ruins of Petra’s largest building

And finally we reach the Temenos Gate constituting a monumental entrance to the most important, sacred district of the city, to the Temple of Qasr al-Bint (25 BC – 25 AD). It was the main temple of Petra and it still stands at a height of 23 m. Its current name derives from a local legend. The legend says that the same pharaoh who hid his treasure in the urn of the Treasury promised to give his daughter’s hand to an engineer who would create a water supply system for the palace. Obviously, several water channels were found around the temple, and the legend made subsequent treasure hunters try to break the urn in the Treasury’s facade.

The Qasr al-Bint is a typical Hellenistic temple, where only priests could enter, while the faithful remained outside, offering animal sacrifices. It is approached by 26 marble steps, at the top of which there are 4 Corinthian columns. It is believed that this temple was dedicated to the main Nabataean deity named Dushara.

The ruins of ancient Petra cover a huge area, it is difficult to briefly describe even the most interesting objects. This one of the 7 new wonders of the world amazes and attracts many tourists. I encourage you to visit my other posts about Petra and watch my video on YouTube. 😀 🙂

Photographs of ruins of Petra and Petra’s Nabataean Temples