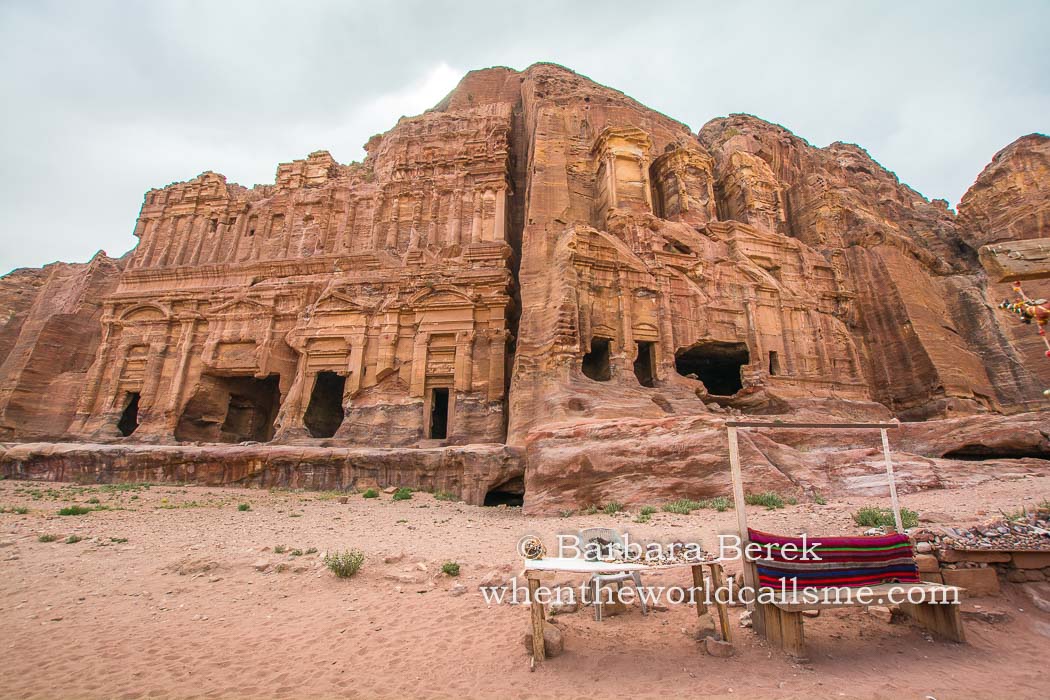 Petra’a monumental tombs carved out of the rock

Petra’s most famous buildings are monumental tombs like Pharaoh’s Treasury, Royal Tombs or Monastery, built on the slopes of the surrounding hills. Their facades, carved out of the rock, are the most characteristic feature of Nabataean art and architecture. Richly decorated stand out with their beauty and their amazing colours which change depending on the colour of the sandstone in which they were carved.

According to ancient custom, graves were built outside the city limits. That is why in Petra they are mainly concentrated near the theater, but also on every nearby slope around the city, and even before the gate to the Siq (eg the Obelisk Tomb). However, not everyone could afford sophisticated tombs, so apart from the most monumental ones, you can also easily find tiny graves without any decorative facade, and even underground communal burial chambers, where the deceased had his own niche (but this kind of graves are not so easy to find 😛). The choice of the grave and its decoration depended on the social position, wealth and personal preferences of the concerned person.

The Pharaoh’s Treasury (Al-Khazneh) is the most famous tomb of Petra. Its name derives from a local legend, according to which the urn at the top of the tomb’s facade is supposed to contain treasure hidden by the pharaoh. Refined carvings of Pharaoh’s Treasury and its almost baroque architecture have survived almost intact, thanks to the good location between the high walls of the gorge, protecting the facade from adverse weather conditions 🙂.

Distinguishing featues of the Treasury led some scholars to think it may had been design as a temple, but the structure of the building, as well as its decoration rich in funerary symbols, rather confirm that it is a royal tomb, probably created for the Nabataean king Aretas III in the late Hellenistic period (2nd century BC).

Other distinctive facades are the so-called Royal Tombs. Although it was not specified exactly who they belonged to, their privileged location, huge façade sizes and decorativeness suggest that they were created for high-ranking people, probably of royal origin.

The most prominent of them are the Urn Tomb, the Silk Tomb, the Corinthian Grave and the Palace Tomb. The Urn Tomb has a colonnaded courtyard on high arcades. From the inscription inside his extensive burial chamber we know that it was converted into a church in 446-447 AD. The Corinthian Tomb is a fusion of local elements with Hellenistic features, while its upper part is very similar to that in the Pharaoh’s Treasury. And finally, the Palace Tomb, whose monumental and richly decorated facade resembles a Greek theater scene.

Wandering around Petra, you can find many more interesting, carved out of the rock tombs. Hidden among the hills are the tombs of Roman soldiers, e.g. those near High Place of Sacrifice. Simply long hikes are an integral part of your visit to Petra. One of them can be completed at the largest of all tombs, the so-called Monastery (Ad-Deir) 🙂 😛.

Anyway I encourage you to visit my other posts about Petra and watch my video on YouTube. 😀 🙂

Photographs of Pharaoh’s Treasury, Royal Tombs and other Petra’s tombs