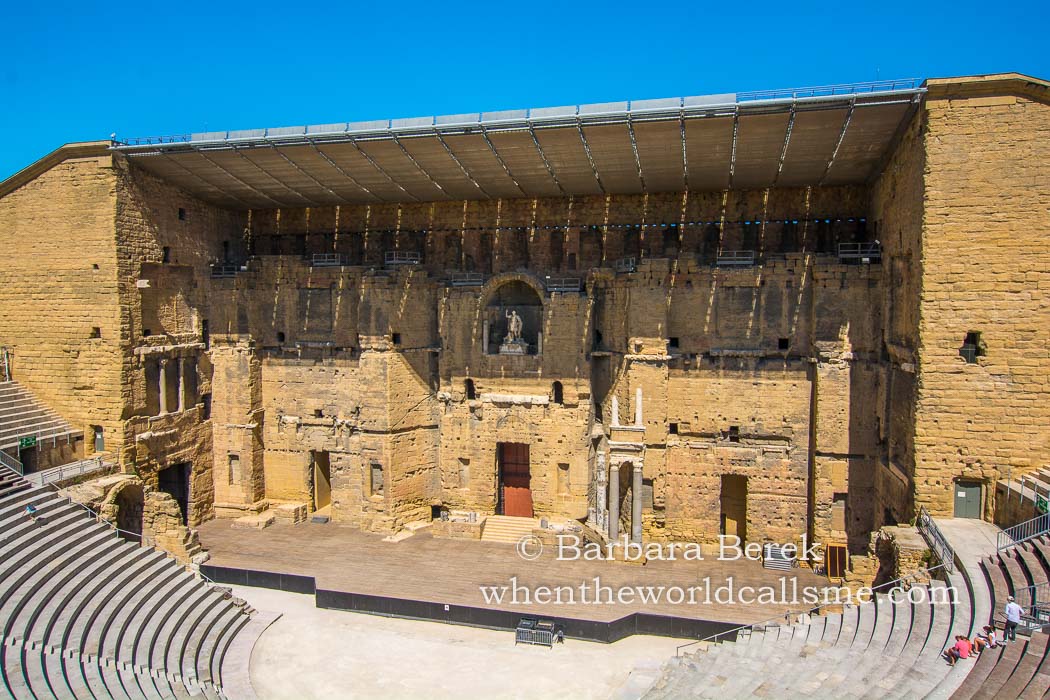 The capital of the Roman province of Arausio

Orange is a city located in the Rhone Valley, north of Avignon. It was founded in 35 BC by veterans of the second roman legion as Arausio (local Celtic water god). As the capital of the vast area of northern Provence, it had many public buildings.

The Roman theater preserved until today was erected in the first century, during the reign of Augustus. In its heyday, it could accommodate over 9,000. viewers. The grand exterior facade is 103 meters long and 37 meters high. Above the stage, in the place where the wooden roof was originally located, now there is a glass roof, so light that it does not harm the structure that has been weakened for centuries.
The great acoustics of the theater is still used during theater performances and concerts.

Another Roman monument in Orange is the Triumphal Arch, built around 20 BC on the former via Agrippa to honor the veterans of the Gallic Wars and Legio II Augusta, the founders of the Roman province of Arausio. The arch is the oldest surviving example of a design that was used later in Rome itself. It is 19,21 meters high and it is covered by a rich decoration, numerous reliefs with scenes of battles and triumphs, and later added inscriptions in honor of Tiberius.

Orange – the charms of the peaceful Provencal town

Orange gives the impression of a charming quiet town where life goes slowly. The narrow streets of the old town are not crowded by tourists. The theater itself is simply huge. Already his outer wall is surprising, and after entering it is difficult to imagine that life looked like this centuries ago. Entrances to the theater were free and available to everyone, even for slaves, and the performances lasted all day. The stage of the theater is so high, and the acoustics so good that it does not bother sitting, even on the highest levels of seats.

Photographs of Orange and the Roman theater