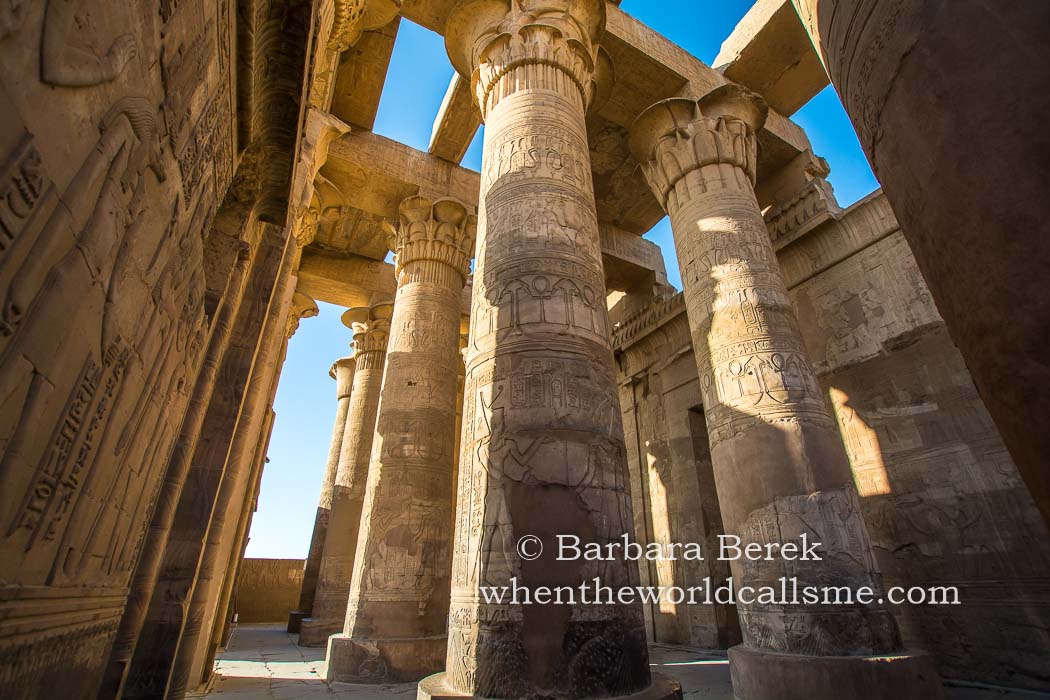 Sailing on the Nile to the picturesque Temple of Kom Ombo

As Herodotus once rightly put it, when he called Egypt the gift of the Nile, to this day Egypt is the Nile and there would be no Egypt without the Nile. This majestic river still flows proudly through the desert sands as it did centuries ago.

Sailing on the Nile, we can admire the seemingly idyllic landscapes and see the life of the local inhabitants, invariably focused on agricultural work for thousands of years. There are also numerous temples of ancient Egypt in the Nile Valley. One of them, exceptionally picturesque, located on a small hill at the very bank of the Nile is the Temple of Kom Ombo from the 2nd century BC.

Thousand years ago, in ancient Egypt, Kom Ombo was called Nubt (the Golden city). The oldest traces of settlement come from the reign of the 18th Dynasty. Kom Ombo, located 50 km north of Aswan, was of little importance, gained mostly thanks to the control of the trade route from Nubia through the Nile Valley. The town flourished only after the Ptolemies erected the local temple.

After the fall of the New Kingdom (1550-1070 BC), the Egyptian “Golden Age” came to an end. The New Kingdom was the time when the country was ruled not only by brave pharaohs, but also by the ones characterized by entrepreneurship and effective politics, such as Amenhotep I, the famous queen Hatshepsut, Thutmose III, Amenhotep II and III, and finally Seti I, Ramses II, known as Ramses the Great (builder of Abu Simbel) or Ramses III.

Successive inept rulers, economic problems and a large influx of people from Libya and the Middle East led to the fall of the New Kingdom around 1070 BC. The so-called Third Intermediate Period began. It was a hard time when Egypt was ruled by foreign dynasties of the Libyans, Nubians, Assyrians, and finally the Persians.

Finally, in 332 BC Alexander the Great, who freed Egypt from the Persians and founded the new capital, Alexandria, appeared. Alexander the Great was seen by the Egyptians as a liberator, even the oracle in Luxor recognized him as the son of the god Ra.

The Ptolemaic dynasty – the last dynasty of Egypt

After Alexander’s death in 323 BC power was taken over by one of his generals, Ptolemy, and thus began the reign of the last dynasty of Egypt, the so-called Ptolemaic. The Ptolemaic dynasty was accepted by the Egyptians. They adopted the customs and traditions of Egypt, they also built numerous temples in accordance with the style of old buildings, such as in Dendera, Edfu, Philae or just here in Kom Ombo.

Temple of Kom Ombo – Sobek in the form of a crocodile

The Temple of Kom Ombo has a unique layout, as it consists of two symmetrical temples connected into one temple building. The left part was devoted to the falcon god Haroeris (Horus the Elder), and the right part to Sobek, worshiped in the form of a crocodile. Therefore the temple has two symmetrical entrances, two hypostyle halls and, of course, two sanctuaries. The construction of the local temple on the site of a much older and much smaller one, erected by Tuthmosis III, was started by Ptolemy VI Philometor in the 2nd century BC, and completed in the 1st century BC by Ptolemy XII Neos Dionysus.

The Temple of Kom Ombo is extremely charming, perhaps because of its location on the very bank of the Nile. 🙂 Or maybe it’s the crocodile god Sobek, which probably everyone remembers. Or maybe, because despite the massiveness of the columns, the Temple of Kom Ombo even seems to be cozy 🙂.

If interested, I invite you also to my Youtube channel. Here is a short video presenting the Temple of Kom Ombo.