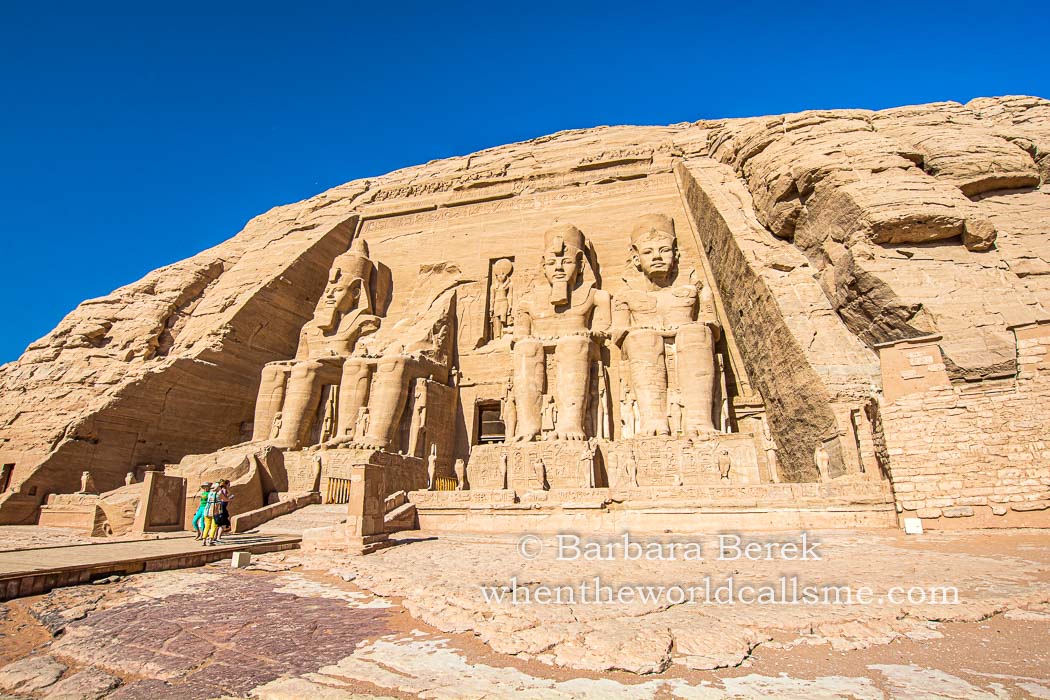 The Great Temple of Pharaoh Ramesses II, carved out of a rocky cliff in the 13th century BC at Abu Simbel, and the adjacent Small Temple of Hathor and Nefertari have certainly aroused admiration and delight for many centuries.

They are located in the heart of Nubia, almost on the border between Egypt and Sudan, about 280 km from Aswan through the Western Desert. However, getting to them is worth every effort 🙂.

In theory, the Great Temple of Abu Simbel was dedicated to the guardian deities of the Egyptian cities: Ra-Harakht of Heliopolis, Ammon of Thebes, and Ptah of Memphis. However, in practice it was erected in honor of the greatest pharaoh of Egypt, Ramesses II the Great.

The Great Temple is actually a representation of the inner sanctuary of ancient Egyptian temples, with the difference that it was cut deep into the rock (58 m). The facade of the temple carved in rock is 38 m wide and 33 m high, while the 4 colossal statues of seated Ramesses II in the double crowns of Upper and Lower Egypt are 20 m high. One of the colossi was probably destroyed during the earthquake in 27 BC. Next to and between the legs of the pharaoh, there are smaller statues depicting members of the royal family.

After entering the temple, you can literally feel like in an adventure movie. The hypostyle hall is supported by 8 pillars, 10 meters high, huge statues of Osiris with the features of Ramesses II. The ones on the right are shown in the double crowns of Upper and Lower Egypt, and those on the left in the white crown of Upper Egypt.

The bas-reliefs on the walls show the numerous war victories of Ramesses II. The most interesting is the depiction of the Battle of Kadesh, in which Ramesses II the Great defeated the Hittites, around 1275 BC. The scenes depicting Ramesses II massacring prisoners of war seem rather macabre. After all, this was their message, they were supposed to show the strength and power of the pharaoh.

At the end of the temple, in the sanctuary, Ramesses II the Great sits next to the triad of deities. An interesting phenomenon is called the “miracle of the sun“, when twice a year (originally on February 19th and October 21st) at dawn, the sun’s rays pass through the entire temple illuminating the figures of the pharaoh and the gods Ammon and Ra-Harakht, with the exception of Ptah, who was a god of darkness.

The Temple of Hathor and Nefertari

The smaller temple of Abu Simbel was dedicated to the goddess Hathor. Ramesses II built it in honor of his beloved wife Nefertari. In the interior much smaller than that of the Great Temple, there are 6 columns with a carved figure of Hathor which decorate the hypostyle hall.

For centuries, even millennia, the Great Temple of Abu Simbel, like many other ancient Egyptian monuments, was buried under sand dunes. And finally, in May 1813, the Swiss explorer Jean-Louis Burckhardt saw the upper fragments of the 4 stone giants, and in 1817 the Italian Giovanni Battista Belzoni discovered the entrance to the temple. Soon, crowds of travelers, archaeologists and tourists came to Abu Simbel.

Construction of the Great Aswan Dam

However, the most difficult challenge appeared in the 1960s, when the construction of the Great Aswan Dam and the creation of Lake Nasser threatened the monuments of Nubia. UNESCO created an international plan to save them, the symbol of which and the most difficult undertaking was the transfer of temples from Abu Simbel. In September 1968 the completion of the work was celebrated. Both temples from Abu Simbel were cut into smaller (but still a few tons) blocks and reconstructed 90 m higher.

The Great Temple of Abu Simbel is surely one of the most unusual and most of all the most majestic temples in Egypt. Once on the banks of the Nile, today on the shores of Lake Nasser, and yet it invariably inspires the admiration of every traveler. 🙂