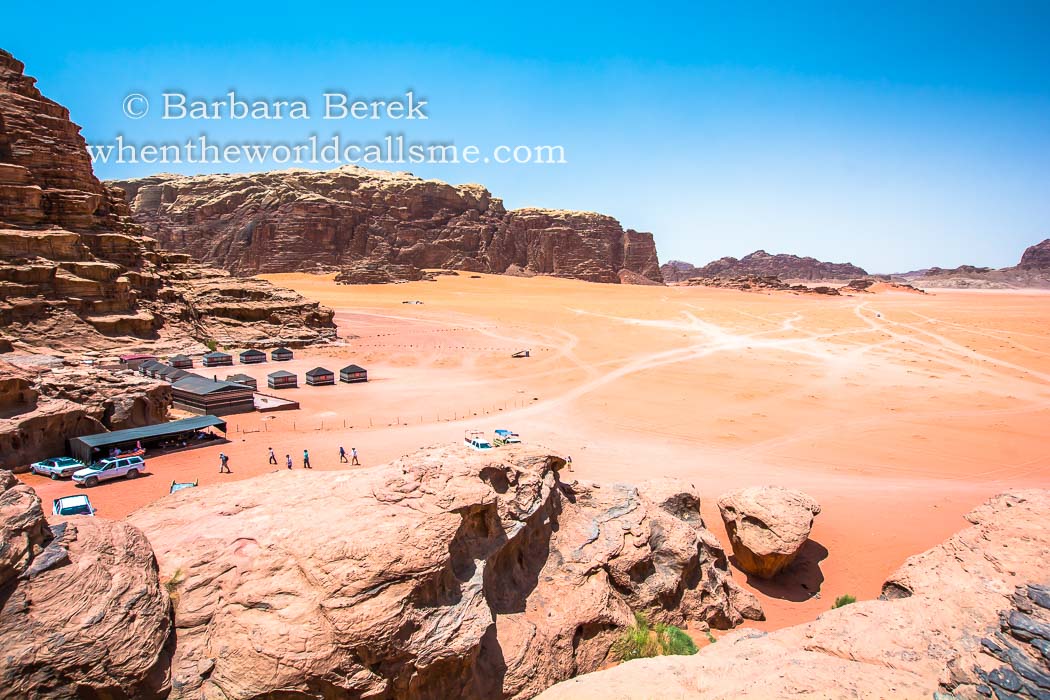 Wadi Rum is one of the most geologically interesting places in the world, additionally with magnificent landscapes. The desert is located in the south-eastern Jordan and encompasses a large plateau, lying at an altitude of 800-1000 m above sea level. Sandstones from which Wadi Rum was created, due to intense erosion, disintegrated, creating various rock forms, single monadnocks, jagged rock heaps, canyons filled with sand or rock bridges. As a result, the whole area was covered with varicoloured sands, creating numerous, not only extremely colorful, but also really high dunes.

The name of the region (Arabian Wādī Ramm) is derived from the largest wadi (or valley) in all of Jordan, while the word Ramm itself probably originates from the Ancient Semitic iramm, meaning “high” or “hill”, which may be indicative of massive rocky heights that fill the whole valley. There is also a slightly more romantic or fairytale term ‘Moon Valley‘ 🙂.

Impressive and beautiful Wadi Rum, captivates with its beauty and colors. It also allows you to really relax from the hustle and bustle and any kind of noise. The desert silence in Wadi Rum is difficult to describe, simply impenetrable. There is definitely no time for boredom, the Bedouins who live here offer different types of activities, including camel rides and even overnight camping in the desert 🙂 .

Tectonic movements, which began about 35 million years ago and led to the creation of the Great Rift Valley, extending from southern Turkey through Syria, the Dead Sea and the Red Sea, and further into East Africa, also resulted in the Wadi Rum uplift of rocks formed over many geological periods, mainly early Paleozoic sandstones: Cambrian red (about 500 million years old), Ordovician light gray, Silurian white. The Precambrian layer of granite remained largely below the surface of the ground.

For thousands of years, nomadic tribes, moving with their herds to wherever they could find pasture and water, and caravans traveling to the Arabian Peninsula have wandered Wadi Rum desert. In the 4th century BC all of the local trade routes were controlled by the Nabataeans, an ancient Semitic tribes who arrived in the area of present day southern Jordan and Israel about the sixth century BC and in the third century BC created a kingdom with the capital in Petra.

The Nabataeans were not only excellent merchants, but also mastered the art of managing water resources, built aqueducts and dams, thanks to which they were able to create considerable settlements also in desert areas. In the Wadi Rum there are still visible traces of their presence in the form of buildings (eg a temple) and numerous rock inscriptions.

Wandering through Wadi Rum, you can often find references to Lawrence of Arabia. Thomas Edward Lawrence served as an officer of the British Army in the Middle East during the First World War. He contributed to the victory of the Arab Revolt (1916-1918) directed against the Ottoman Empire, taking part in the key clashes, including Aqaba raid. His success and the fame he enjoyed among the local people earned him the nickname of Lawrence of Arabia. Lawrence’s feats have become part of local folklore, and some of the popular tourist destinations are named after him, although the fact that he stayed in these exact places is not entirely certain.

Overnight in the desert

Wadi Rum is a place so extraordinary and beautiful that it is difficult to comprehend that somewhere in the world there are such amazing landscapes. Nature carved here various, really stunning rock formations. The local Bedouins are extremely friendly to tourists, the food they prepare is really tasty, and the overnight stay in the desert is an attraction in itself 🙂.