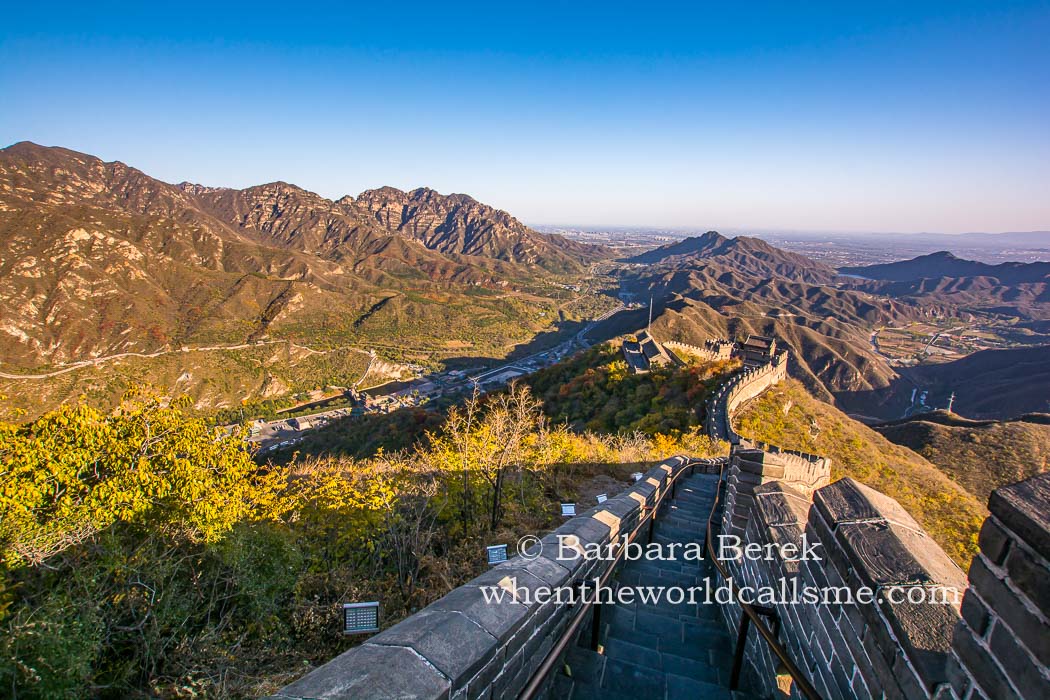 Great Wall, or maybe many walls

The Great Wall of China, stretching through deserts, hills, mountains and plains, actually consists of different fragments of fortifications built along the northern border of China by successive dynasties of rulers.

How old is the Great Wall of China?

Its history dates back to the 7th century BC, the Warring States Period, when fortifications were built on the borders of individual states mainly in the form of earth ramparts. In 221 BC China’s first emperor (Chinese: Qin Shi Huang – “The first Sovereign Emperor of Qin”) conquered the last of his opponents and united China. He ordered the destruction of fragments of the walls dividing his empire from within and the construction of a new wall, which would be a symbol of his power and and would connect the remaining north fortifications.

Were people walled up there?

Mostly locally available materials were used to build the walls, and about one million workers died of exhaustion. The dead were supposedly walled up in the walls. However, archaeological research carried out so far did not find any human remains, and the legends themselves were to prove the tyranny of the First Emperor. Little of the original wall of the Qin dynasty have survived to our times. In addition, the fact that the Qin fortifications reached far beyond the area of Chinese settlement and passed through the nomads’ territory indicates that the wall was not defensive, but rather offensive, marking the borders of the occupied territory.

The Great Wall during the Ming dynasty, finally brick

Later, various dynasties tried to strengthen or expand existing walls until they fell into oblivion. The idea of building the great wall revived in the 14th century under the Ming Dynasty, when the great pressure from the Mongolian tribes and the lack of a clear victory after successive battles was clearly taking a toll on the empire. Unlike earlier fortifications, the wall built in the Ming era was more solid and durable due to the use of bricks and stone.

Despite the efforts, the wall was repeatedly crossed by the people of the Great Steppe. Finally, in 1644, the Manchus crossed the Great Wall and seized Beijing, which was already in the hands of the rebels. The newly established Qing dynasty taked over China and the Great Wall lost any strategic significance.

How long is the Great Wall of China?

Archaeological research has shown that the length of the walls built by the Ming dynasty is 8,850 km, including 6,259 km of artificial wall, besides ditches, rivers, mountains and other natural barriers. Thanks to modern technologies, it was found that the total length of the Great Wall with all its branches is 21,196 km, but most of its fragments are not brick. Due to the natural erosion, the wall is now mostly destroyed, and even demolished by local residents and re-used as building material. Only a few fragments are restored and made available to visitors. In 1987, the Great Wall of China was included on the UNESCO list, and in 2007 it was proclaimed one of the seven new wonders of the world.

In addition, it is interesting that for the Chinese, the Great Wall is “Long Cities” or “Long Walls” because the Chinese use the same word to describe both the city and the surrounding wall, and because of the length of the Great Wall they add an adjective “long”. The term “10,000 Li Great Wall” also appears, which figuratively indicates “immeasurable” length.

Is the Great Wall of China visible from space?

And finally, is it visible from space? If you’ve been to the Great Wall, the answer seems clear, it is unfortunately not. The wall does not stand out from the surroundings in terms of color, it is relatively narrow and too winding. In our time, this thesis has already been verified empirically and it is known that it is not visible even from low Earth orbit. Unfortunately, I could not check if it can be seen from the plane, but apparently it is barely noticeable. 😛

Is it worth going to China to see this famous wall?

Still, being on Great Wall and feeling that your dreams come true is simply fun. It’s like pure joy. Because this is a dream that seemed quite distant, and the Great Wall known since childhood could give the impression of a fairy tale rather than reality. But it is there and it is even tangible 😀 😛

If interested, I invite you also to my Youtube channel. Here is a short video presenting Great Wall of China.

Photographs of the Great Wall of China