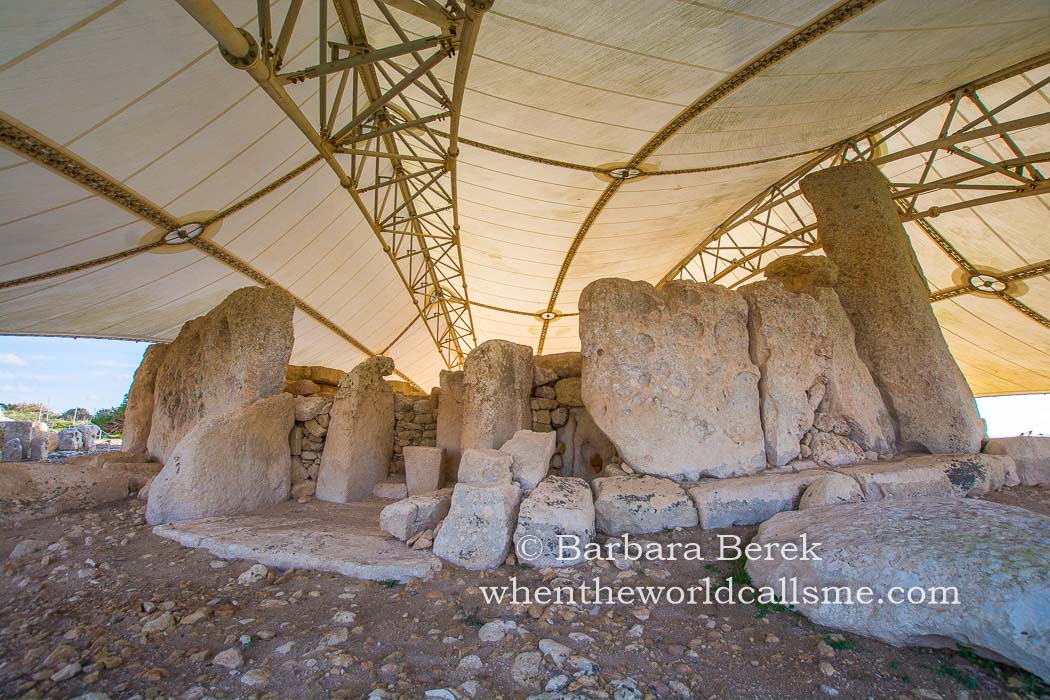 In the footsteps of ancient civilizations

Ħaġar Qim and other megalithic temples of Malta can easily awaken the imagination. They are like a journey in time, especially unique that it concerns several thousand years back, to times so distant and so unknown that they become even more fascinating. These few traces of prehistoric people often bring more questions than answers.

Permanent settlements appeared on the Maltese islands together with settlers from Sicily around 5200 BC in the period called the Ghar Dalam phase. The cultural development was the result of processes that had begun centuries before in the entire Mediterranean. It was connected with the climate changes, rising temperatures, changing sea levels. The spread of agriculture and thus deforestation drastically changed the environment, especially on such small islands as Malta and Gozo. Struggling for survival and adapting to all those changes led to the emergence of settlements with a complex social structure, development of art, crafts and religious rituals.

With time, megalithic structures began to arise on the Maltese islands. Their construction took place between 3600 and 2500 BC, in the so-called Temple Period. Temple builders had the profound knowledge of materials and resources available in the Maltese inslands, they were also masters in stone processing. No wonder, that they created remarkable structeres that lasted over 5,000 years.

Megalithic temples incorporate many common features, which remained practically unchanged over a span of over 1000 years, the entire Temple Period. Built on a clover-like plan, they consist of 3 to 6 apses arranged along the central corridor. They are built of massive rock blocks, the processing and transport of which required the organized effort. It indicates the extraordinary level of advancement and creativity of the local community during prehistory.

The choice of the temple’s construction site had been largely dictated by several factors, including the access to the sea and fresh water as well as the fertility of the area. Most of the temples discovered so far are located on the slopes below a hilltop. Ħaġar Qim Temples are unique, because of standing on the crest of a ridge. As a result, the main temple building seems to look out in all directions. In addition to the entrance in the main façade, the temple also has side entrances giving access to other parts of the building, as well as an external niche not appearing in any of the other temples.

Initially, the main temple may have consisted of 4 or 5 apses, but extended throughout the entire 4th millennium BC has a unique and quite complex ground plan.

The central part is paved in stone slabs, while the floors in the side apses are made of torba, which is a lime floor created by crushing limestone, wetting and pounding it repeatedly, until a smooth surface is obtained. The walls surrounding the building consist of an external wall built of huge megaliths and an internal wall made of smaller stone blocks. The space between them is filled with soil and rubble.

One of the largest megaliths found in Malta is located in Ħaġar Qim and it is 6.4 m long and weighs about 20 tons. Another, the highest one, is 5.2 m high. Many architectural solutions used inside the temples undoubtedly indicate that moving through them and participating in the rituals they housed, were apparently restricted and some rooms were available only for a given social group.

Similarly to Mnajdra Temples, the main temple in Ħaġar Qim is also believed to had beem used for astronomical observations. In the wall of one of the apses there is an elliptical hole. Exactly at sunrise on the first day of summer (Summer Solstice), the sunrays passing through this hole form a crescent on the opposite stone slab, slowly descending downwards while the sun rises higher above the horizon until they form a disc on the apse’s floor.

It is probable that the remains of Ħaġar Qim Temples, which in Maltese translates as “standing stones” or “stones of veneration”, have never been completely buried. The massive stones visible above the ground have always aroused curiosity. They appear even on the 18th century paintings, while in the 17th century, theories about giants who built these mysterious temples appeared. At the beginning of the 19th century, a theory emerged proclaiming the Phoenician origins of temples.

The interest in megaliths led to the early excavations of Ħaġar Qim carried out in 1839. However, only at the beginning of the 20th century it was concluded that the temples probably date back to the Bronze Age. Exact dating was only possible through the application of carbon dating techniques in the 1960s. It was then determined that the Ħaġar Qim and Mnajdra Temples undoubtedly date back to the 4th millennium BC.