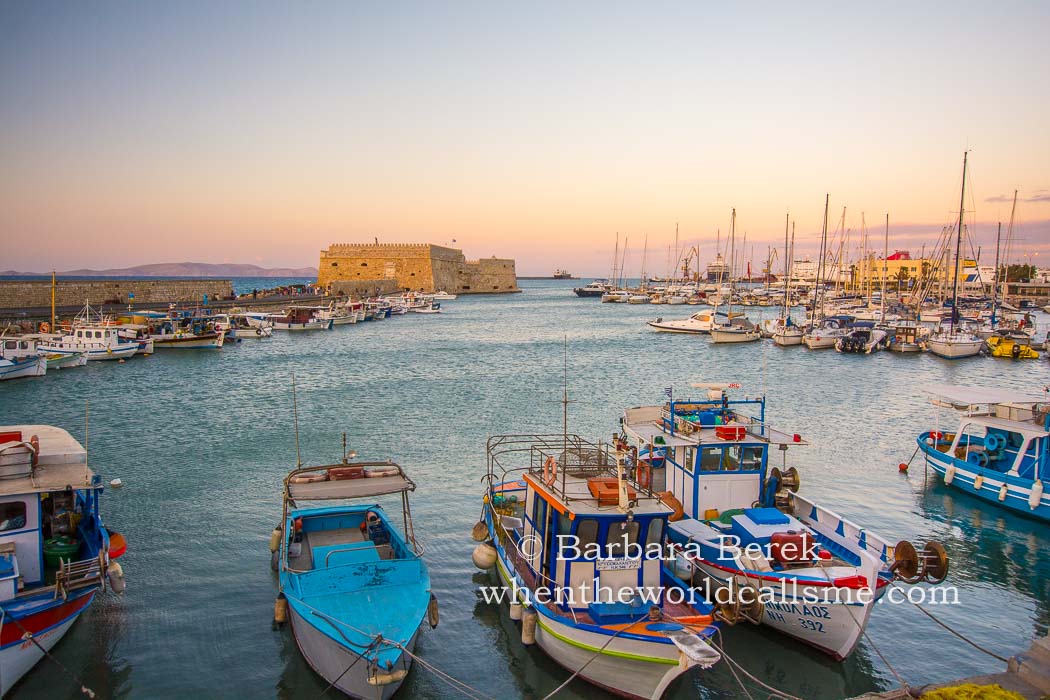 Contents
Minoan port
Candia – Venetian fortress in Crete
Rocca a Mare
22-year Turkish siege of Candia
Heraklion, the incorporation of Crete to the Kingdom of Greece
Photographs of Heraklion

The found traces of Neolithic settlements in the area of Heraklion are dated to the 7th millennium BC. Due to the closeness of the palace of Knossos, which in Minoan times was the largest centre of population on Crete, it is believed that from the beginning of Early Minoan period there was a port at the site of modern Heraklion.

However, the city called Chandax was founded in 824 by the Saracens who had taken over the island from the Eastern Roman Empire. They allowed the port to be used as haven for pirates who attacked Byzantine ships and raided Imperial territory around the Aegean. This caused that in 961 Byzantine forces under the command of Nikephoros Phokas captured and completely destroyed the city. Rebuilt and controlled by the Byzantines, the city was bought by the Republic of Venice in 1204.

Venetians, to defend themselves against Turkish attacks, built huge fortifications with bastions, some of which we can still see today, e.g. the fortress of Rocca a Mare defending the port or the defensive wall (in some places 40 m thick). During the reign of the Venetians, the name of the city of Chandax was changed to the Italian Candia, often used to refer to the whole island of Crete as well. The city flourished, creating its own variety of Renaissance art, today known as the Cretan Renaissance 🙂 .

In 1645, the Turkish army landed on Crete, starting war against Venice. After conquering the fortresses in Chania and Rethymno and seizing control of the rest of the island, in 1648, the Turks started the siege of Candia, the strongest point of resistance. Candia defended itself for 22 years and eventually surrendered on September 27, 1669.

Heraklion, the incorporation of Crete to the Kingdom of Greece

In 1898, as a result of the anti-Turkish uprising in Crete and the Greek-Turkish war, the Republic of Crete was established, and in 1913 Crete was incorporated into the Kingdom of Greece. After liberation from the Turkish control, the city was renamed Heraklion, after the Roman port of Heracleum (“Heracles’ city”).

Unfortunately, the Second World War and the German bombing during the invasion of Crete caused many destructions in Heraklion. However, the area around the port and the streets of the old town have retained much of its charm.