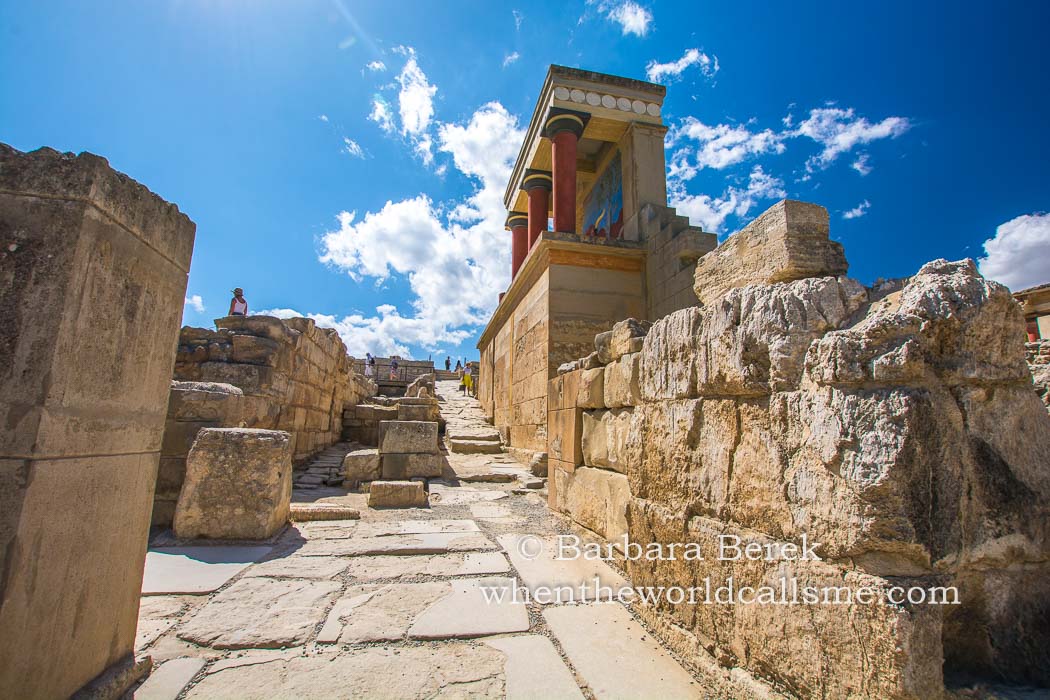 Contents
Minoan culture, the myth of Minotaur and the lost labyrinth of King Minos
Minoan civilization phases
Old Palace Period
Eruption of the volcano on Thira island and the end of Minoan culture
Visiting the palace of Knossos
Photographs of Knossos

Minoan culture, the myth of Minotaur and the lost labyrinth of King Minos

The first traces of settlement on Crete date back to the Neolithic period (around 6700-3200 BC). The civilization called Minoan developed in the Bronze Age. It was discovered at the beginning of the 20th century thanks to excavations at the Palace of Knossos led by the archaeologist Arthur Evans. The name of the Minoan civilization derives from the Greek myth of the Minotaur, a monster sealed by the king of Crete Minos in the labyrinth under the palace of Knossos. An interesting fact is that one of the signs of the Roman legions during the Republic was the likeness of the Minotaur.

Traces of the longest existing Neolithic settlement in Crete were found on the Kephala hill, under the ruins of the Minoan palace of Knossos. The first houses were built close to each other and the residents performed daily work in a shared space. With time, each house gained a separate courtyard or own hearth. Changes in the way of building indicate the emergence of social divisions.

During the Early Minoan period (3200-2100 BC) thanks to new bronze tools, communities began to grow, build larger houses with courtyards covered with stone slabs, towns had streets and central squares. In the graves from this period, there are gold jewelry, ivory products, items imported, among others from Egypt, which indicates the development of trade in the Mediterranean.

During the Old Palace Period emerged cities with compact buildings and without defensive walls: Knossos, Phaistos, Agia Triada, Malia, Gournia. It is believed that the first Cretan palaces were constructed within large cities around 2000 BC. They rose among urban buildings, in the neighborhood of high officials’ houses. The palaces were centers of government and social life and consisted of administrative offices, shrines, workshops and storage spaces. Palaces were often multi-story with staircases, lightwells, massive columns and courtyards.

Around 1700 BC the palaces at Knossos, Phaistos, Malia and Kato Zakros were destroyed probably by an earthquake (possibly an invasion from Anatolia). At the beginning of the New Palace Period the population increased again, the palaces were rebuilt on a larger scale and new settlements were built across the island. Palaces walls were decorated with large frescoes, faithfully reproducing nature, depicting scenes from the life of the court and celebrations.

Around 1450 BC as a result of a natural catastrophe, probably an eruption of the volcano on Thira (now Santorini), earthquakes and a huge tsunami, most of the Minoan palaces were destroyed (among others Phaistos, Agia Triada, Tylissos, Malia). The palace in Knossos remained largely intact and its ruling dynasty spread its influence over large parts of Crete until it was overrun by the Mycenaean Greeks. It is uncertain when the palace ceased to function. At any rate, after 1380 BC, a large part of its former glory had been lost.

Around 1100 BC Crete was invaded by the Dorians, and later in the year 69 BC it was conquered by the Romans. At that time Gortyn became the capital of the island.

Visiting the palace of Knossos

The palace of Knossos, the capital of Minoan Crete, surrounded by a vast city, was the largest and most developed of all on Crete. Built on the Kephala hill, it continued to grow thanks to its fertile land and proximity to the sea. The palace consisted of about 1000 chambers surrounding the central courtyard and equipped with a sewage system. In the west wing there were shrines, official rooms and a huge warehouse while in the east there were ruler’s apartments and workshops.

Unlike other Minoan buildings, the palace of Knossos was partially reconstructed in the years 1900-1929. Despite the criticism from many scientists, visiting Knossos and wandering about the archaeological site, it is easier to daydream about the life on Crete in Minoan times 🙂 .