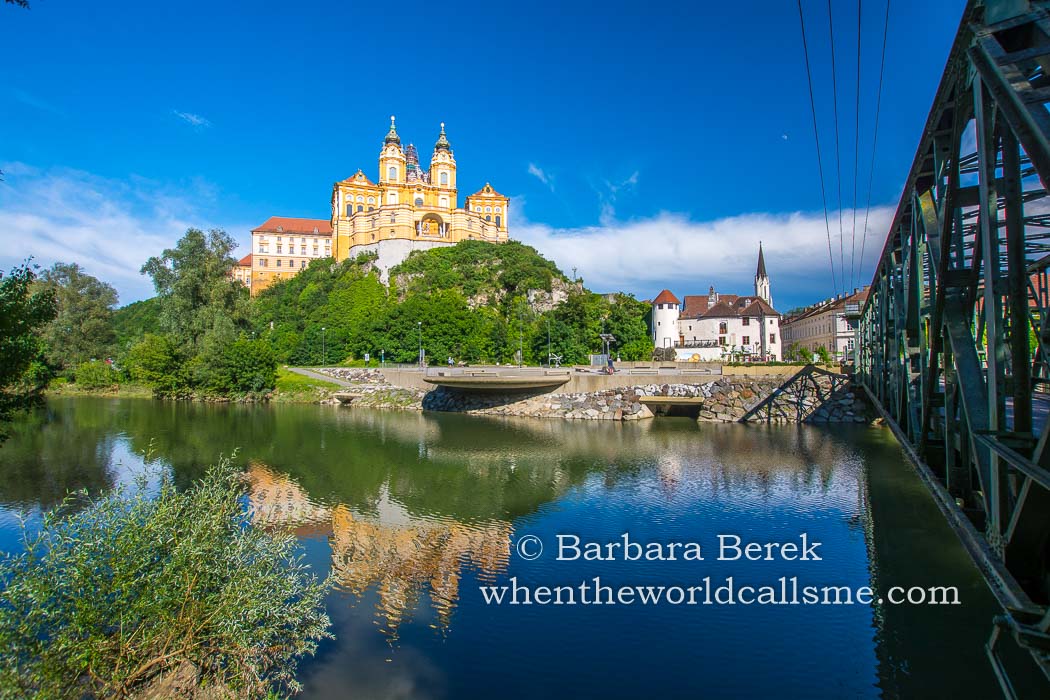 Lying on the Danube riverbank, Melk Benedictine abbey is located west of Vienna in the beautiful Wachau Valley, famous for its many monuments and wine growing.

The mild climate of the Wachau Valley favored settlement already in the Neolithic period. Famous archaeological findings, such as the Venus of Willendorf, come from those distant times.

Later, the Celtic kingdom of Noricum which developed in this area, was occupied by the Romans in 15 BC. Around 40 AD Emperor Claudius gave the lands south of the Danube (nowadays Styria, Carinthia and Upper Austria) the status of a province, keeping the former Celtic name of Noricum. After the collapse of the border in the 4th century, the Noricum area was repeatedly attacked and invaded. In later centuries, among others, Slavic or Magyar settlements were created.

The settlement of Melk itself appears in source documents for the first time in 831 as Medilica. The name comes from a Slavic word meaning “border” (sounds almost like “miedza” in today’s Polish to me 🙂).

The first margrave of the House of Babenberg

A little later, in 976, the area around Melk was assigned to Leopold I to serve as a buffer zone between the Magyars to the east and Bavaria to the west. Leopold I became the first margrave of Austria and founder of the Babenberg line ruling the Margraviate of Austria.

A very important date for contemporary Austria is the year 996. It was then that the word Ostarrîchi was used for the first time. Ostarrîchi later evolved to German name of Austria: Österreich (Latin: marcha orientalis – eastern March).

On a hill, or rather a cliff, high above the modern town, Leopold I built a stronghold, his new residence. In 1089, Margrave Leopold II gave the castle above Melk to monks from Lambach and this way founded a Benedictine monastery in Melk. Since then, the hill has been the seat of the order.

Reforms in the monastery

In the 15th century, Melk Benedictine abbey became a center of reforms of religious life. Monks, returning to the teachings of St. Benedict of Norcia, entered the path of asceticism, virtue and science. They also strengthened contacts with the University of Vienna. Over time, other abbeys began to adopt new rules. Recognition of church authorities reached its greatest expression in 1625, when Pope Urban VIII saw the Melk solutions as model for the Benedictine congregation.

The fame and academic status of Melk Benedictine abbey helped it to avoid the fate of other Austrian abbeys, which were taken over and dissolved by the state in 1780-1790 under the Emperor Joseph II. The same happenned during the Napoleonic Wars.

Melk on the Danube – sightseeing

The present baroque appearance of the monastery is the result of a thorough expansion carried out in the 18th century. The largest baroque monastery complex in Europe attracts visitors with beautiful architecture and enchants with interior decoration, and above all with illusionist frescoes.

Melk is extremely charming. This small town lying so close to Vienna seems to be just a haven of peace. 🙂

Photographs of Melk and Benedictine abbey