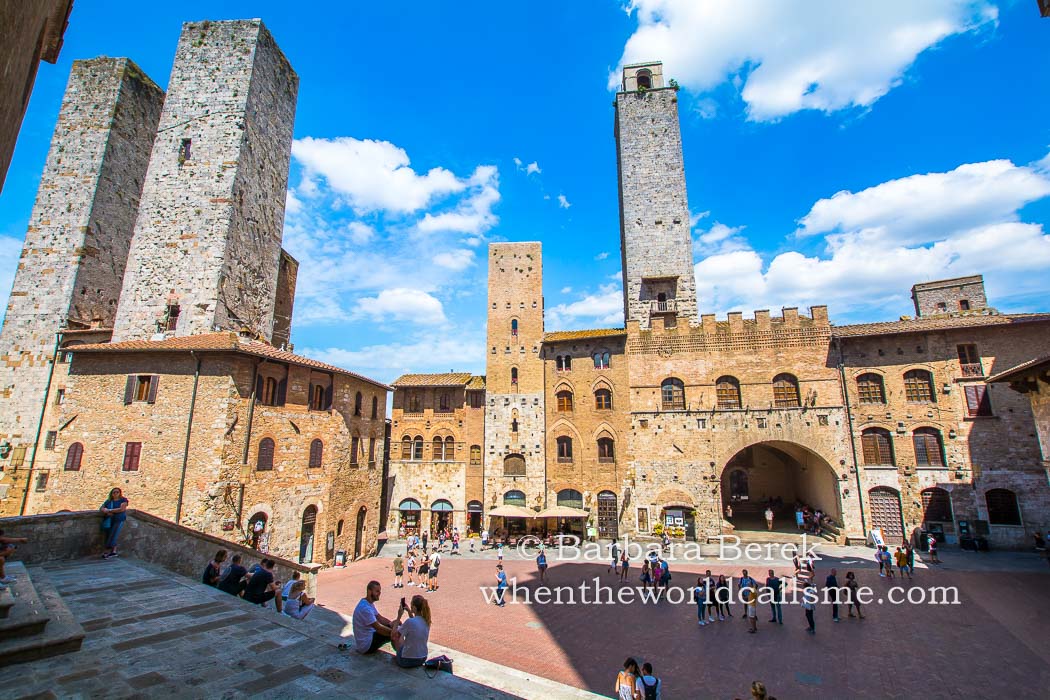 San Gimignano is today a small medieval town in Italy, and more precisely in Tuscany, in the province of Siena. It is known primarily for its huge towers. In the amazing panorama of the city, we can almost see modern skyscrapers, but when we look closely there are medieval towers. The towers, once popular in the area of today’s Italy, now as the best preserved here in San Gimignano they became the symbol of the city.

Where did the name San Gimignano come from?

In the 3rd century BC there was an Etruscan village in the place of today’s city, as evidenced by the presence of Etruscan graves. Later during the Roman Republic, a castle called Silvia was built here. In 450, its name was changed to San Gimignano in honor of the Bishop of Modena, St. Geminian, whose intercession saved the city from the Huns invasion. From 929, the city was ruled by the bishops of Volterra.

Via Francigena – a medieval pilgrimage route

San Gimignano, situated on the crest of a hill, was already fortified in the 10th century. Over the next 3 centuries, the city grew considerably richer and bigger thanks to its convenient location on Via Francigena, in place where Via Francigena intersected with the road leading to Pisa.

How long is Via Francigena?

Via Francigena, or the Way of the Franks, is one of the longest pilgrimage routes in Europe, and at the same time a historic, transalpine communication route. It runs from Canterbury in England through, among others Reims, Lausanne or Siena to the tomb of St. Peter in Rome, and its length is approximately 1610 km. The name Via Francigena was mentioned for the first time in 725 and in those days it simply meant the road by which the Franks, the people on the northern slopes of the Alps, came to Rome.

The development of trade and the rise of the local aristocracy

In the 12th century, San Gimignano became independent from the bishops of Volterra and became a free city. The new situation initiated the rapid development of the city. The production of saffron (at that time very desirable in Europe), obtained from crocus grown in the surrounding fertile hills, and the location on Via Francigena additionally favored the development of international trade. Over time, a group of wealthy traders become an aristocracy of San Gimignano. As it happens with the aristocracy, they invested some of their money in representative buildings, in this case not only public buildings or palaces, but also high towers.

Towers have become a symbol of power. The rule was quite simple, the greater the wealth, the greater the tower. Local families, which were often in fierce conflict with each other, competed in the construction of towers. Some of them were even 70 meters high. However, in order to reduce the risk of the towers collapsing, a law was passed according to which no one could build a tower higher than the one belonging to the city administration (at that time it was 51 m). But the most stubborn ones circumvented even this limitation. 😀

In the fourteenth century, San Gimignano had 72 towers, only 16 have survived to our times.

Black death and the end of the town’s glory

Unfortunately, the golden age of the city did not last long. In 1315, the city, as the rest of Europe, was hit by a great famine. In 1348, the Black Death decimated the town’s inhabitants. Subsequent disasters led San Gimignano to voluntarily surrender to Florence in return for care and assistance. Since then, the city has completely lost its importance.

However, it was this process of marginalization that kept San Gimignano’s urban layout as well as its medieval appearance and character for the next 7 centuries. It was only in the 19th century that the tourist, artistic and historical values of San Gimignano were appreciated. Currently, the historic center of the city is on the UNESCO list.

For me, San Gimignano is definitely one of the most interesting places that can literally transfer us back in time, the more that the city has survived in this form for 7 centuries 🙂. Without a doubt, the tall, stone, medieval towers are the biggest attraction, but each street is simply very atmospheric. 🙂