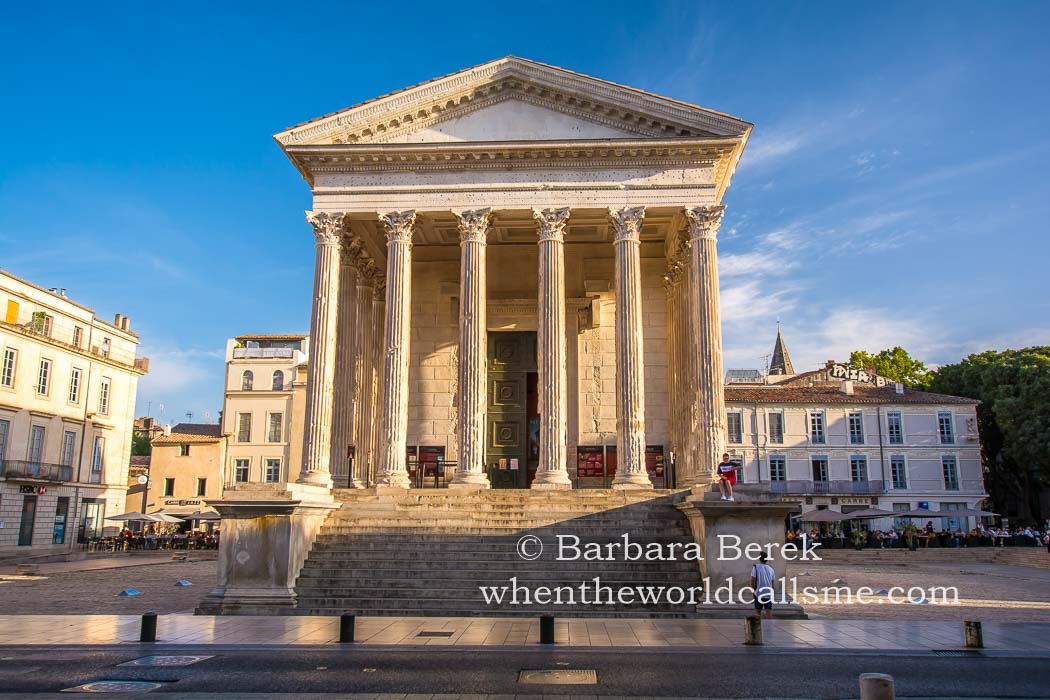 Nîmes located in the Languedoc-Roussillon region (now Occitania), near the Mediterranean coast, is a charming French city with amazing Roman monuments. Before the Roman period, there was a fortified Celtic village (oppidum) on the top of Mont Cavallier in the Nîmes area. At that place was the sacred Celtic source of Nemausus (the Celtic god), from which derives the name of the city.

Roman province of Gallia Narbonensis and Via Domitia – road to Hispania

By the mid-2nd century BC, Rome which by this point was trading heavily with the Greek colony of Massalia, agreed to protect the town from local Gauls in exchange for a small strip of land needed to build a road to Hispania, Via Domitia. Nîmes found itself at the center of the route. After many years of cultural and economic domination of Marseilles, it slowly began to enter the Roman world.

In 123 BC after the victorious campaign of General Quintus Fabius Maximus against the Gallic tribe of the Arverni, the security of Gallia Narbonensis was ensured. In 118 BC the Romans founded the town of Narbonne. From Narbonne, they established the province of Transalpine Gaul, later called Gallia Narbonensis.

The wars of Gaul and the fall of Marseilles allowed Nîmes to regain autonomy under Rome. Finally around 45-40 BC The Emperor Augustus officially set up the colony of Nîmes (Latin: Colonia Augusta Nemausus), and in 27-25 BC he made it the capital city of the Narbonne province.

Loyalty to Rome has provided the city with numerous benefits. Around 16 BC Augustus surrounded Nîmes with a ring of ramparts 6 kilometers long reinforced by 14 towers. To this day, there are 2 gates: Porta Augusta and Porte de France and Tour Magne, the largest tower in the fortifications (currently measures 32.7 m). At that time, the city had about 60,000 residents. There was also built an aqueduct supplying water to the city (Pont du Gard). The remains of the final part of the aqueduct have survived in the form of a cylindrical structure (Castellum divisorium), designed to distribute water to the city using a pipe system.

La Maison Carrée, the temple built in 5 AD originally dedicated to Gaius and Lucius (adopted grandchildren of the Emperor Augustus), is also exceptionally well preserved. It is beautifully decorated and so captivating that it is difficult to take your eyes off it. It is just hard to imagine how it happened that it survived in this condition up to our times.

Invasion of the Visigoths

The fall of Roman Nimes occurred in 470, when the city was taken over by the Visigoths after many invasions.

Visiting Nimes you can feel the dimensions of ancient Roman cities on your own skin. Despite the theoretically small distances, the walk from the amphitheater to Tour Magne is definitely noticeable. Along the way there are the Jardin de la Fontaine created in the 18th century around the Roman ruins, with still existing ruins of the Roman temple of Diana. You can simply meet the Nimes’ Roman history with almost every step 🙂 .