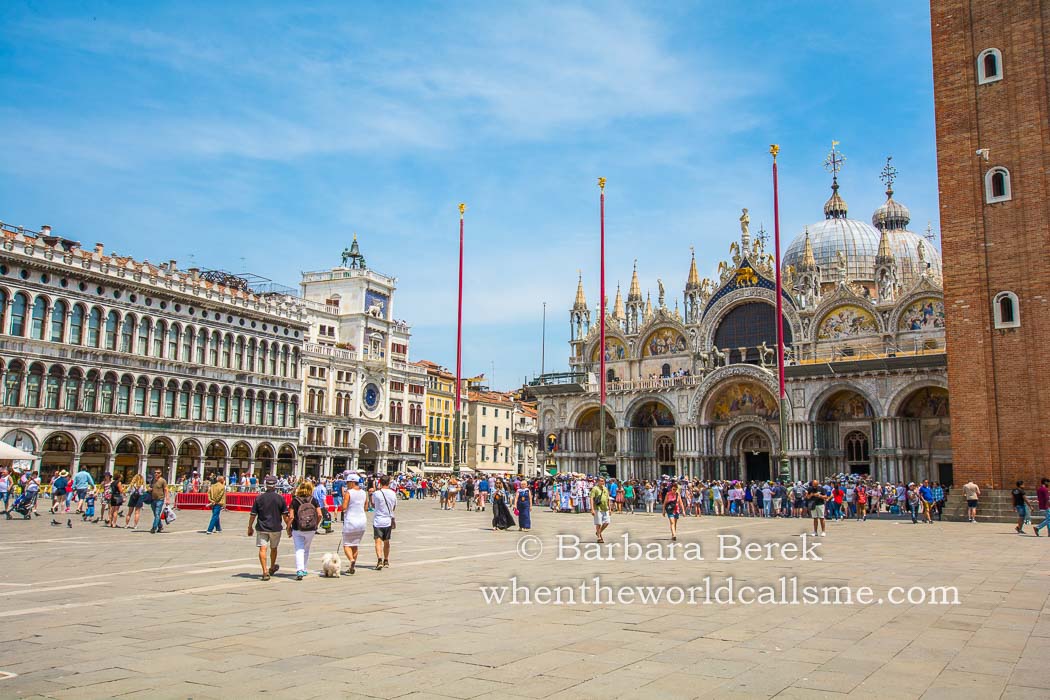 Venice is divided into sestiere (districts). The heart of the city is Piazza San Marco in sestiere San Marco, with many representative buildings like the Basilica of St. Mark or the Doge’s Palace.

Piazza San Marco, which is the most crowded place in Venice, for centuries has been a witness of many events.

To the east, the square is closed by the Basilica of St. Mark. The beginnings of the basilica date back to 829, when the doge Giustignano Partecipazio decided to build it in order to give a dignified shelter to the remains of St. Mark the Evangelist. In the tenth century, the basilica was destroyed by a terrible fire. Later, in the years 1043-1071, it was rebuilt in today’s shape.

The original monumental severity of the basilica over time was filled with magnificent mosaics and marble ornaments, creating a synthesis of various styles, from Byzantine, through Gothic, to Renaissance.

The Doge’s Palace (Palazzo Ducale), which stands next to the basilica, from the ninth century was the residence of the next doges and the seat of the authorities of the Republic. It was originally a fortified castle. Several times destroyed by fire, it obtained today’s form as a result of works carried out in the 14th and early 15th centuries, becoming a masterpiece of Venetian floral Gothic style.

The facade of the Doge’s Palace covered with white and pink marble from Verona is beautifully decorated with ground floor arcade and first floor loggias made of Istrian marble. Above the main portal there is a symbolic sculpture of the doge kneeling in front of the winged lion.

St. Mark’s bell-tower was initially a watchtower and a lighthouse. Its construction began in the ninth century, but rebuilt many times over the centuries it gained the present shape in the 16th century.

On July 14, 1902, it suddenly collapsed. The reconstruction started almost immediately ‘exactly as and where it was’. In 1912 on St. Mark Day (April 25) Venetians officially celebrated reopening of the Campanile. Measuring 98.6 m it is the highest building in Venice.

The Renaissance clock tower (Torre dell’Orologio), built in the 15th century, in the lower part is a gate leading to Mercerie. On top of it there are bronze figures called Moors (Mori), which for five centuries have been ringing the bells and striking the hours. In the middle part of the tower there is a clock with a gold plated and enamelled shield, which was placed on the tower at the end of the 15th century. It shows not only the hours but also phases of the moon, signs of the zodiac and even the seasons. Just an amazing invention 🙂 .