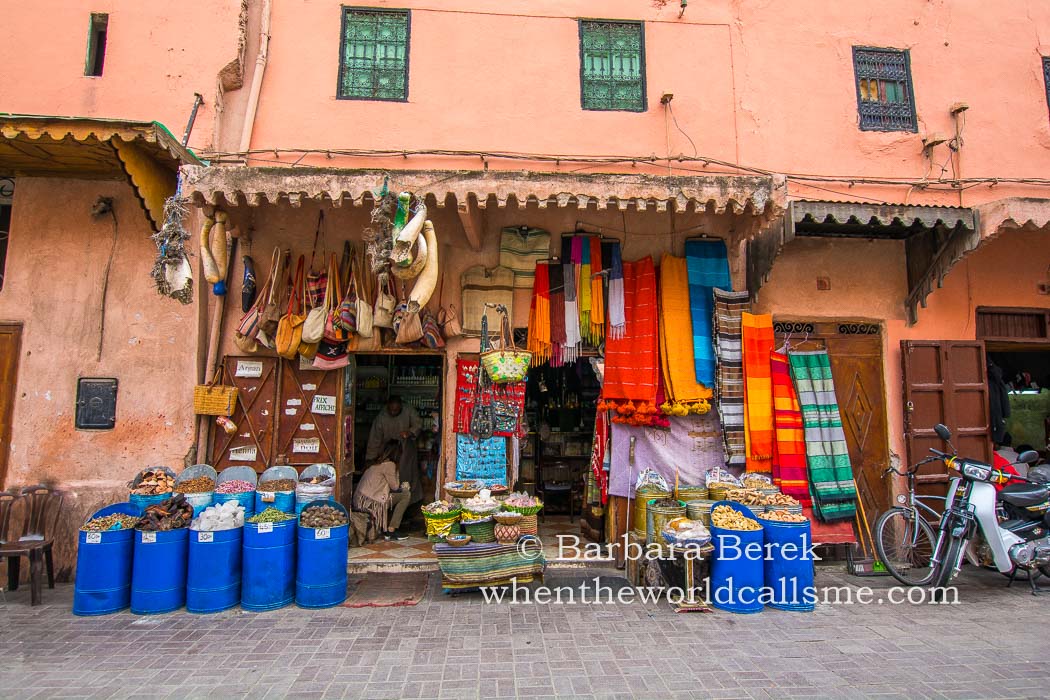 Marrakesh, located in the southern part of Morocco, at the foot of the High Atlas, fascinates visitors from Europe and other parts of the world. It is even called the “Pearl of the South“. Oriental architecture, colorful stalls full of ceramics, fabrics, carpets, leather or cypress products, piles of fragrant spices… All this in some way enchants and somehow transfers in time, or even to a land almost from a fairy tale, to the world of past adventurous travellers.

Important trading center of the Maghreb

The area was already inhabited in the Neolithic by the nomadic Berber tribes. However, Marrakesh itself was founded around 1062-1070 by the Sahara-descended, warlike, Berber rulers of the Almoravid family. Under their rule, the city developed as an important trading center of the Maghreb. Numerous mosques and madrasas (Muslim theological schools where the Koran, law and Arabic were taught) were established. Andalusian craftsmen from Cordoba and Seville were hired to build palaces and mosques. At the beginning of the 12th century, Marrakesh was surrounded by defensive walls. These walls, made of red clay, are up to 9 meters high. Almost unchanged from the Almoravid era until today, they still surround the medina. Some of the gates are excellent examples of Moorish architecture.

In 1147 Marrakesh was taken over by the Almohads. Sultan Abd al-Mumin established here the capital of his dynasty. He also wanted to build one of the largest mosques in this part of the Muslim world. This is how the Koutoubia Mosque was created, another masterpiece of Moorish architecture. The pink stone minaret is 70m high and later served as a model for the construction of the Giralda in Seville and the Hasan Tower in Rabat. The name of the Koutoubia Mosque means “booksellers mosque” and is derived from the manuscript souk that once surrounded the mosque.

After the fall of the Almohad dynasty, it was the turn of the Marinids of Fez to rule in the area. However, economic recovery and prosperity did not return until the 16th century, after the Saadian dynasty came to rule. The traces of that period in the Marrakesh medina are, among others, the Saadian Tombs.

Although the Alawite dynasty ruling from the 17th century moved the capital to Fez and later Meknes, Marrakesh became a popular destination for Sufi pilgrimages.

Marrakesh is an old fortified city full of vendors and their stalls. Its medina was entered on the UNESCO list in 1985. It is here that the largest traditional market (souks) in Morocco is located. The souks in Marrakesh are among the most interesting in the whole Maghreb. Today, traders offer a wide variety of Moroccan crafts, from Berber carpets and baskets to jewelry. Leathercraft products are also particularly popular.

For centuries, the heart of Marrakesh was Jemaa el-Fnaa, even though criminals were beheaded here until the 19th century and their heads were preserved and hung over the city gates. Today it is mainly a market square. Jemaa el-Fnaa begins to bustle with life after sunset. The ubiquitous mixture of aromas of spices, herbs, smoke, fried meat… Musicians, magicians, and even snake charmers… All this makes the square attract crowds, including crowds of tourists who want to immerse themselves in the Moroccan world 🙂