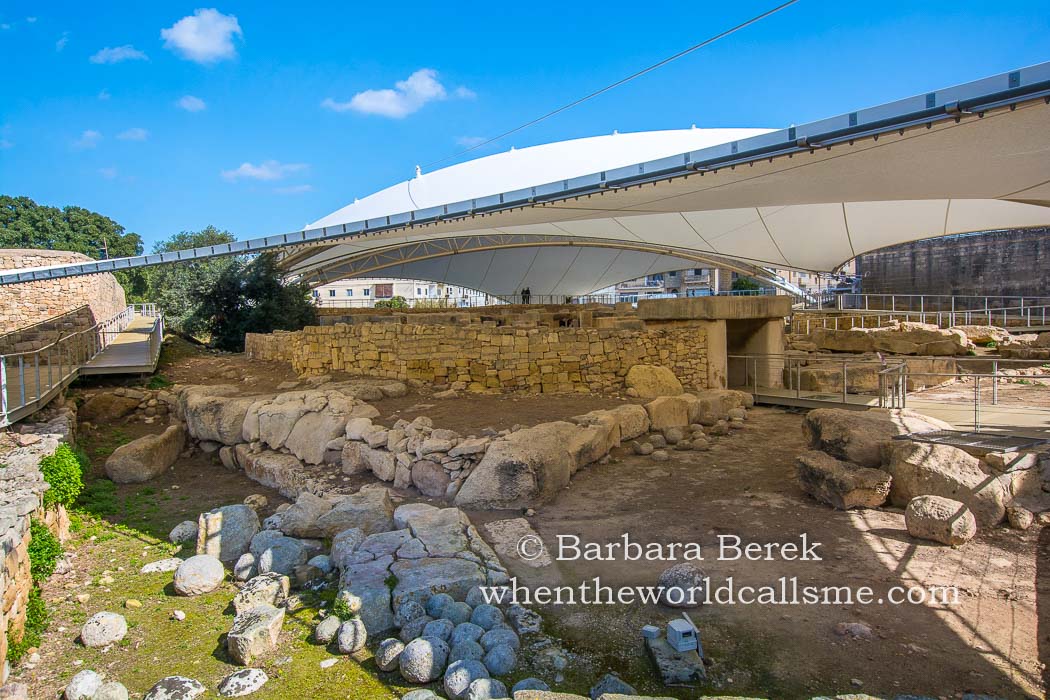 Tarxien – the megalithic temples of Malta

Archaeological research has shown that the Tarxien Temple Complex was in constant use over the centuries, also after the end of the Temple Period. The oldest pottery fragments found here come from the period known as the Żebbuġ phase (4100-3800 BC), and are therefore several centuries older than the megalithic temples.

The Tarxien Temples were being built over 1,000 years in the Late Stone Age (3600-2500 BC). Judging by their size and extremely complicated layout, you can imagine that this place might once have been highly appreciated by the people of Malta.

The oldest and the most modest of the temples is the so-called Far East Tarxien Temple, built at the same time as Ġgantija (around 3600 BC). Although not much of it is left, it clearly resembles the megalithic temple of Ta’ Ħaġrat. The 3 temples that are visible today were built later, in the period of time called the Tarxien phase (3000-2500 BC).

During the Bronze Age, the South Temple was used as a cemetery. 2000 years later, the Romans converted the area into farmland by building various canals and cisterns here. It is also possible that they used old megalithic temples as cellars…

Shortly after the accidental discovery of the Hypogeum Ħal Saflieni, located a short distance from Tarxien, in 1902 it turned out that the history of settlement in Malta stretches far back to an unknown prehistory. In search of its traces, attention was drawn to the unusual terrain forms or large blocks of stones. Whatever could be a clue to start excavations. In the Tarxien area, a local farmer reported that his field had large stone blocks at a shallow depth. The excavations eventually began in 1915 and the megaliths, already known from Ħaġar Qim, Mnajdra or Ġgantija, were uncovered almost immediately.

Temples completely hidden beneath the surface of the earth

These days, the Tarxien Temples seem to be carefully hidden in a maze of alleyways. Nothing in the area looks like a prehistoric landscape anymore. Temples completely hidden beneath the surface of the earth have been forgotten over time. After the first excavations, Sir Temi Zammit tried to leave the surrounding fields undeveloped in order to create a protective zone for the temples, but unfortunately this did not happen.

The Tarxien Temples, the most elaborate of all the megalithic temples of Malta, have also become the site where the most examples of prehistoric sculpture have been preserved. In addition to stone blocks, decorated with reliefs depicting spiral patterns or various animals, in one of the apses a fragment of a statue of a corpulent human figure wearing a wide skirt was also found. It is similar to smaller statues from other temples. 🙂